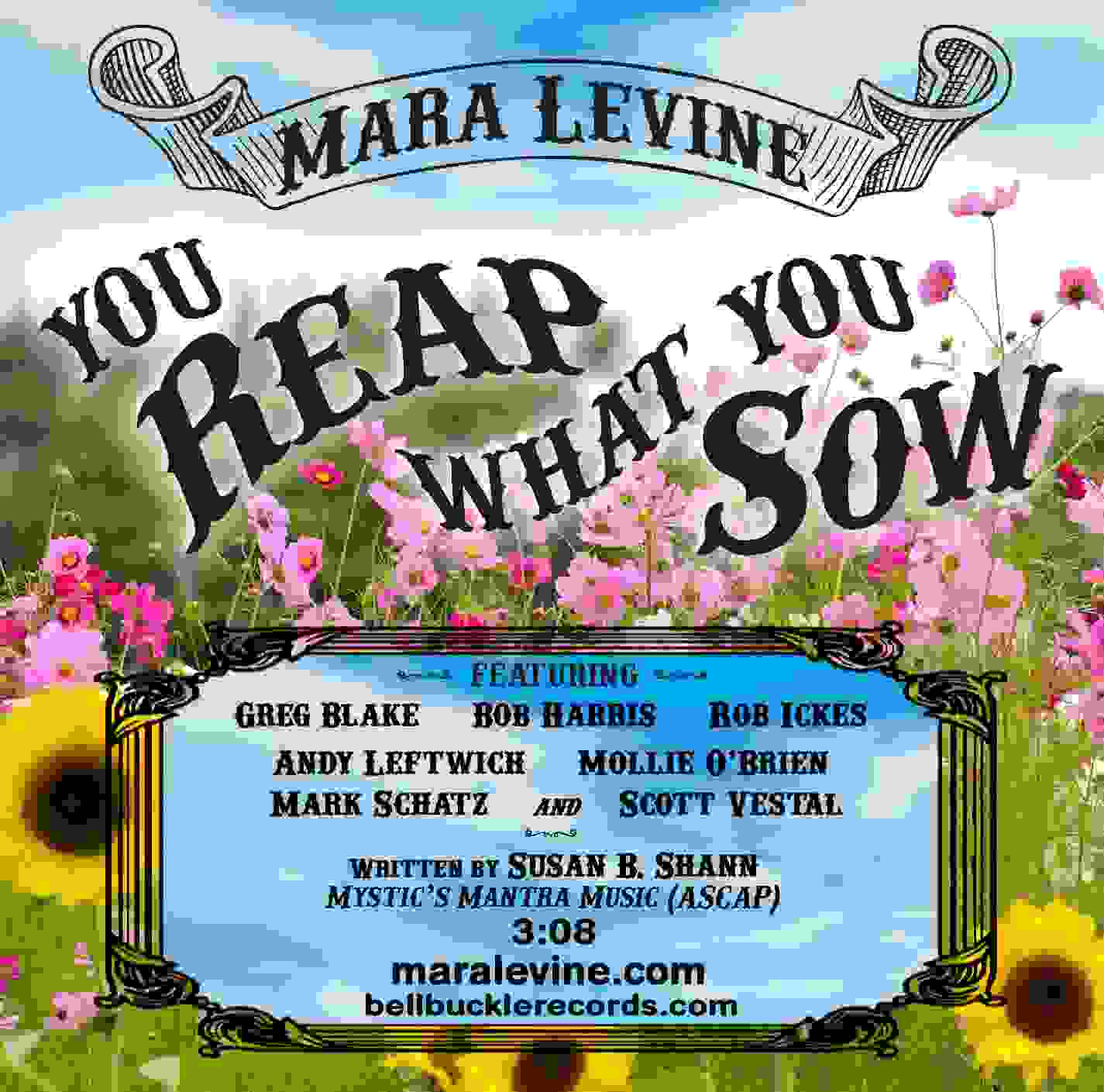 Mara Levine Unveils Video "You Reap what you sow"

(November 15, 2020) — Critically-Acclaimed Performer Mara Levine, who recently signed to renowned TN-based label Bell Buckle Records, has announced the release of her inspirational new video "You Reap What You Sow," just in time for the Fall harvest and the Thanksgiving holiday. Offering an uplifting message of hope and renewed growth, the video accompanies the first track off Levine’s top-charting album Facets Of Folk, which is slated to be re-released on Bell Buckle Records in January 2021.

Upon first hearing the song, written by Nashville songwriter Susan Shann, Levine was moved. "The entire song resonated with me as a positive message about doing your best at whatever you do and reaping the rewards and fruits of your labors,” Levine said. “One could also interpret the song to mean caring for others and nurturing relationships, in particular keeping your word and your commitments, and that this will be returned to you in kind. I think that the message about caring for each other is timeless and more important now than ever. I hope that folks watching the video come away feeling positive, uplifted, and inspired."

"Valerie is a talented videographer and we'd been discussing how to shoot some quality footage of me for the video for several months but, of course, due to Covid-19, we were restricted on where and how we could film,” said Levine, who is based in New Jersey. “Finally, we hit on the idea of meeting at a farm close to where she travels to in Maryland for her business, and I found The Sunflower Garden, a wonderful pick-your-own-flower farm in Westminster, MD. Valerie made the trip from Nashville specifically to shoot the video, came up with a wonderful concept, and created an absolutely beautiful video!

"I am deeply appreciative of the time, effort, and care she has put into this production, which was made under such difficult circumstances, and I am very grateful to be part of the Bell Buckle Records, who are helping me achieve my goal of getting my music out to a much broader audience.”

"I'm excited that we added such an established folk/grassicana artist to our roster at Bell Buckle Records,” said Smith. “I believe that Mara is adding depth to our talent base and catalog offering for our customers and radio DJs. Mara is someone that I have been looking forward to working with on her music and career goals. Her voice is unique, her recordings are beautiful, and her talent as a musician is undeniable."

In conjunction with Bell Buckle Records re-release, Les Butler, of Butler Music Group and Family Music Group, will be sending "You Reap What You Sow" to Southern Gospel and Bluegrass Gospel radio programmers for January 2021.  Butler was impressed by the recording upon first listen and said "This song and this voice was a breath of fresh air the moment I heard "You Reap What You Sow." I am honored to represent Mara and this song as a single to Gospel radio worldwide!"

Radio Programmers can download the track for airplay here:  http://www.airplaydirect.com/music/maralevine/

Called one of the best singers of her generation by Christine Lavin, and “the new standard-bearer for folk music” by the Midwest Record, singer and jewelry designer Mara Levine is known as an exceptional song-finder, selecting and then creating beautiful interpretations of fine traditional and contemporary songs.

“You Reap What You Sow” was released in 2019 as part of her critically-acclaimed chart-topping album Facets Of Folk, which hit #1 on the Folk Alliance International Folk DJ chart for January 2019, with the #1 artist and song spots, and was the #3 album for 2019, with Mara claiming the #2 artist spot overall for 2019.

Her second CD, Jewels and Harmony, was the #1 album on Folk DJ-Chart for January 2013, with the #1 artist and song slots, and finished #3 for the year. She's also had six #1 songs on that chart over the years, including “You Reap What You Sow,” which also spent 22 weeks on the Bluegrass Today Grassicana Chart.

"Some people, like the one described in Leonard Cohen’s classic song, are born with a Golden Voice. Mara Levine is one of those gifted few who fit that definition.  Hearing her sing makes you stop whatever you are doing and LISTEN!  Known for her warmth, sincerity, and impeccable natural musicality, she makes us all listen more intently and celebrate the beauty that she brings to every song she sings. Try to go to hear her live or listen to anything she has done or does.”

“Mara Levine’s clear and expressive vocal on “You Reap What You Sow” is supported by a stellar lineup of musicianswho together deliver a tasteful and artfully produced rendition of this heartwarming song.”
~Mark Schatz

You Reap What You Sow / Mara Levine

You Reap What You Sow

Listen to Mara on Soundcloud

Called "one of the best singers of her generation" by Christine Lavin, Levine received high praise for this record release concert thanks to their powerful performances, which included her most popular songs “Daughters and Sons” by Tommy Sands (which debuted at #1) and “You Reap What You Sow” by Susan Shann (which also debuted at #1).

"On her third album, Levine marks her territory as the new standard bearer for folk music with this classically framed set that finds her interpreting worthy modern classics, protest music and some of the sweetest vocalizing you'll find this side of the golden sounds of the ‘60s. A flat out winner throughout, this isn't about lo-fi, nostalgia or what ever—It's a delightful slice of the here and now hitting the nail right on the head. Well done." – CHRIS SPECTOR, Editor and Publisher, MIDWEST RECORD

"Mara Levine is a gifted singer whose expressive and versatile voice is suited to any style of music she darn well pleases to focus on including bluegrass, country or folk." - Dede Wyland, SKYLINE

“A thank you to Mara Levine for making us all remember the poetry of lyricism. Some people, like the one described in Leonard Cohen’s classic song, are born with a Golden Voice. Mara Levine is one of those gifted few who fit that definition. Hearing her sing makes you stop whatever you are doing and LISTEN! Known for her warmth, sincerity and impeccable natural musicality, she makes us all listen more intently, and celebrate the beauty that she brings to every song she sings and inspire us to do better ourselves, in whatever field we work in. Try to go to hear her live or listen to anything she has done or does. Thank you, Mara, for what you have done and continue to do.” – David Amram, Beacon, NY

"This collection of 13 "fine and contemporary " folk songs from the likes of Paul Simon, Tommy Sands, Gordon Lightfoot, Bill Staines and Si Kahn is delivered most admirably. Ms. Levine has a wonderful voice which she uses with heart and aplomb, delivering excellent renditions of her extremely well-chosen songs, some well known, some not so much.  Her version of Christine Lavin's "The Moment Slipped Away" is as fine a song as I have ever heard and have now experienced it thanks to Ms. Levine's fine choices on her excellent playlist called Facets of Folk. The world needs more such interpreters of fine and contemporary folk songs." - Les Siemieniuk, PENGUIN EGGS

With Facets of Folk, Mara Levine solidifies her position as a folk force to be reckoned with.  As on her previous CD Jewels and Harmony, her signature sound shines through: Thoughtful song choice, creative harmonies, rich instrumentation, her own exuberant singing.  With an emphasis on songs that make a difference, Mara has created music that is very much for today, but also for years to come. - Si Kahn - songwriter and activist

"Mara, I think you are one of the best singers of your generation. Every songwriter worth their salt should be sending you their tunes. You have such a beautiful, timeless quality to your voice and you make beautiful recordings. I just LOVE what you do."  - Christine Lavin, singer-songwriter 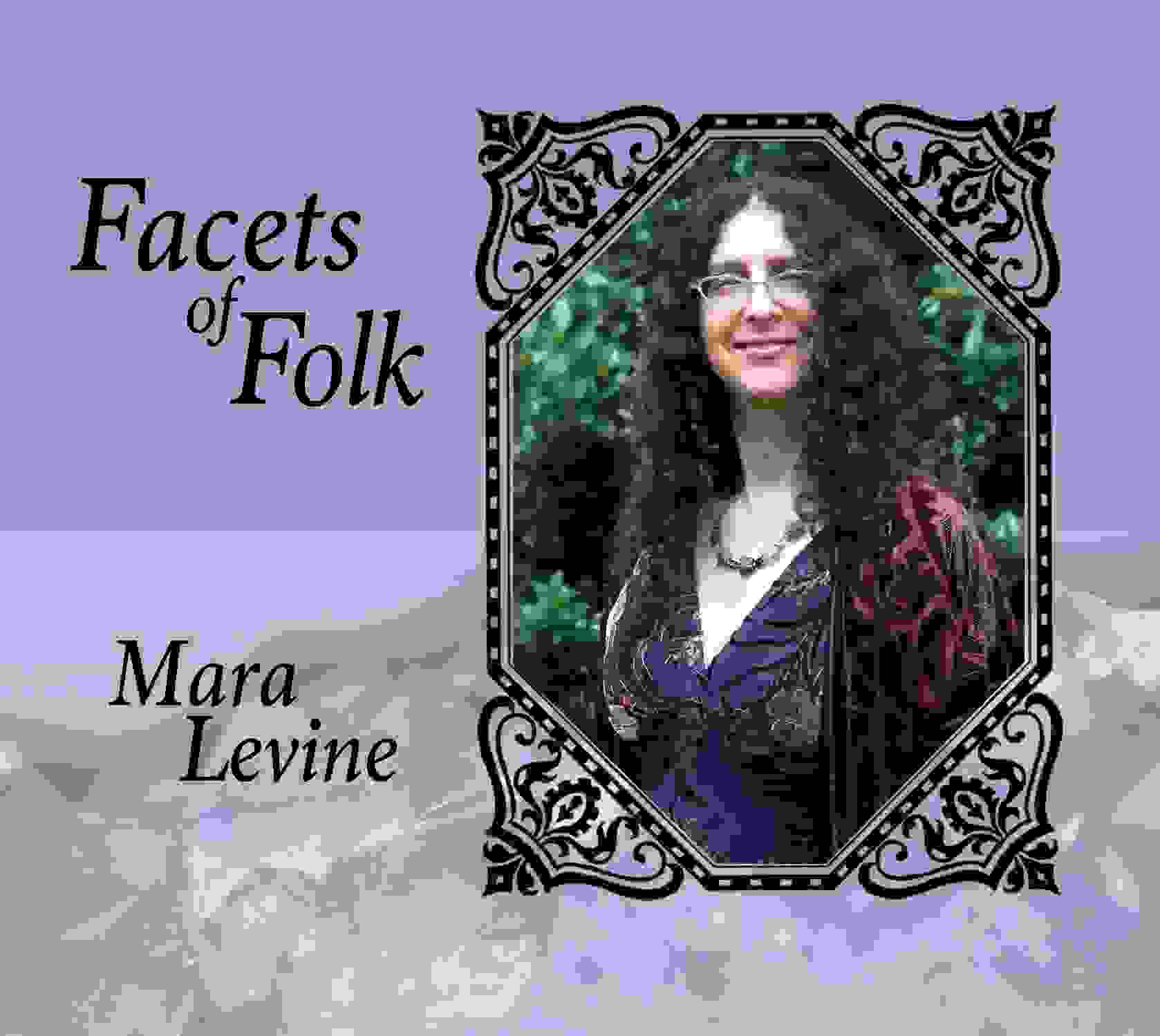 On FACETS OF FOLK, Levine presents a number of songs of social conscience with themes of taking a stand, making a difference, considering the treatment of others and becoming a better person. Those tunes, written by popular contemporary songwriters as well as emerging talents, are all carefully set among folk favorites and lesser known songs.

Facets of Folk has been critically acclaimed and was the #1 album on Folk Alliance International Folk DJ-Chart for January 2019, with the #1 artist and song spots, and was the #3 album for 2019, with Mara claiming the #2 artist spot overall for 2019.

Her rousing version of the protest anthem, “Daughters and Sons”(Tommy Sands), featuring special guests Kim and Reggie Harris swapping lead vocals with Levine, and Gathering Time on harmony vocals was the #1 song for January 2019 and “By My Silence” a provocative warning about the perils of remaining passive in the face of injustice, written by award winning Florida singer-songwriters Ellen Bukstel and Nick Annis, recorded with Gathering Time reached #1 on the Folk DJ Chart when it was released as a single in September 2017.

Connect With Mara Levine on Social!